Here is the Parrot AR Drone 2.0 review, a product we’ve been looking forward to for a long time. If you’re not yet sure whether you want to buy a drone, then this review should help make your mind up. This is the second version of the Parrot AR Drone quadcopter that you can control via an iOS device like an iPhone or an iPad through the free application available via the AppStore. It is also available on the Android market place. It is a really cool device to play with so I’m going to jump straight into the review to help you decide whether it is a drone you wish to buy.

First of all, the design of the Parrot AR Drone 2.0 looks pretty cool as you can see. It comes assembled out of the box. Now, for a price like this, it has to be durable, has to be able to withstand lots of different abuse and punishment and it certainly lives up to its expectations.

They did a really good job with the design because they do provide you with two different hulls, indoor and outdoor. The indoor hulls is what you want to use for flying it indoors. It is made out of expandable polypropylene and it attaches very easily to the Parrot AR Drone 2.0 itself. The case covers the top of the drone as well and as you can see, you have two different skins to choose from. 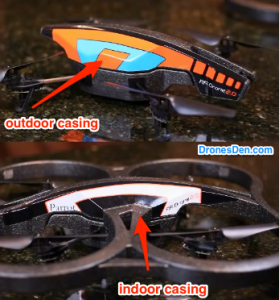 This is an engineered plastic foam so it is a foam that is very LIGHTWEIGHT but also very DURABLE. If you do happen to break different parts, it is fully repairable and there are lots of videos on how to repair it on YouTube. In some cases, it may simply involve sellotaping the different parts, should they crack or fall apart.

In the middle, you will find the battery pack compartment which houses the 1000mA included battery that comes with the AR Drone. One of the negatives here is that the battery life is not that great. That battery will only get you about 8-10 minutes worth of flying time. However, you can buy different 2,000mA batteries for about $30-40 off Amazon that will more than double that time, increasing it to about 20 minutes. The one linked above uses the original charger that comes with the Parrot AR Drone 2.0. 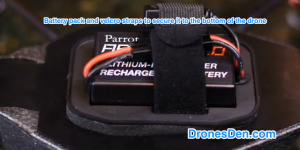 This new model, compared to the first version of the Parrot AR Drone, also has a pressure sensor which basically acts as an altimeter which means that if you are flying over 6ft high in the air, the device itself will give itself more control by making the different movements a lot smoother. The altimeter also makes the drone be more aware of its surroundings, whereas the previous version of this quadcopter didn’t have this so if you were flying very high, you would have found it a bit harder to steer.

This new model still comes with two cameras, but the front camera is updated. It is now a 720p HD camera that can record at 30 FPS. It is also a wide angle lens, so it will get the job done so far as capturing your footage inflight. You can record the footage from both of these cameras directly on the smartphone or iPad itself, or you can plug in a USB stick into the USB port that is right next to the battery and now you can choose to record everything on that stick so you can save the memory on your phone. 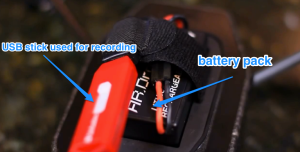 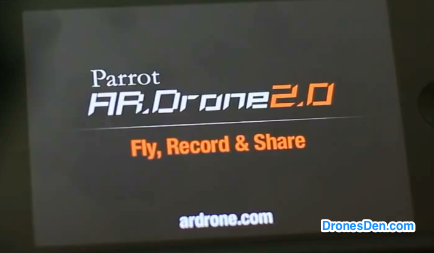 The AR Drone 2.0 doesn’t come with a remote control, so you have to use an Android or iOS device with it. This is the application screen you will see on your device after launching the app. 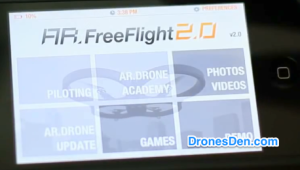 Piloting takes you directly to your drone, you can also update the software on your drone via the App by clicking the “AR Drone Update” button. It also has different games that you can play with your drone, all of which come from Parrot. You can get a specialized hat/ augmented reality device to play these game with your drone in flight mode. In one game for example, you can play with a friend and try to ‘shoot down’ the other drone which is really cool!

From the app you can also access your photos and videos that you’ve taken and you can play them back or share them directly onto YouTube right from the application. 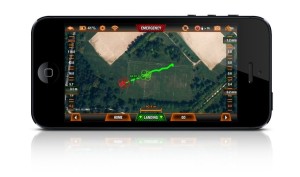 Take off button: Tapping this will start the drone and will start flying up vertically. This button will turn into Landing once you’re in flight mode and this will slowly land the drone by itself.
Emergency button: In case you’re a worse pilot than you thought and you’re about to fly into a tree or another person’s face, you can hit this emergency button which will turn off everything and the drone will fall down to the ground.
Switch button: Switches between the camera at the bottom and the front camera.
Record: Records video
Camera button: Takes a picture no matter what you’re doing

This allows you to change the WiFi network, change altitude limit, maximum vertical speed, maximum rotation speed and other settings as you can see.

The Absolute Control setting is one of the biggest additions to this Parrot AR 2.0 Drone and I will talk about this more in a few seconds

Self-explanatory, Parrot AR Drone 2.0 uses the gyroscope on your phone to fly around. It is very easy to learn to navigate. I had a few friends of mine bring their kids around (10-16 years old) and even they managed to have it under control in less than 5 minutes. Very intuitive and easy to fly, this is what the “Absolute Control” setting allows you to do, it basically smoothly controls every single move. It is a pleasure to fly and rather hard to explain how easy it is in writing.
Here is what one of the kids said:

If you are able to play doodle jump, then you should be able to fly this easily

So how high and how far can you get?

The only limit really is the WiFi signal between the drone and your smartphone itself. The range appears to be about 300-400 ft but will vary slightly depending on the smartphone or other iOS you might be using

The other thing I wanted to mention is exactly how durable the drone is. I have crashed it several time, even by pressing the emergency button from high altitudes and the drone survived just fine, I was able to take off again straight away. This Parrot AR Drone 2.0 drone is extremely durable. If you had any other rc planes or rc helicopters before that broke easily after a few crash landings, then this drone is completely different. Your kids will definitely love it as a birthday or Christmas present and will be able to use it for a long time. So it is both fun to play with and will also be able to survive some tough damage to it.

– Battery life on the included battery is not that great, BUT the best part is that you can buy third party batteries such as these from Amazon and these battery can give a flight time closer to the current industry’s limit of about 20 minutes, so if you want to get full enjoyment of this drone, you’re going to have to invest into a separate battery. The good thing is that they’re not actually that much, you can get a higher 2,000mA capacity one for about $30-40.
– The camera quality whilst it has improved over the first generation of the AR Drone, it is still not quite up to par with a lot of other mini cameras such as iPhone 5S camera which is a lot better. It is also not as good as the cameras you can get on the DJI Phantom 2 Vision+ for example, which is a lot better quality. The cameras however does get the job done, but it’s not great should you wish to take high resolution photos or videos to play on your 50” plasma at home.

– Parrot was able to deliver an absolutely improvement on all the different critical things from the first Parrot AR Drone. They made it easier to fly, made it a more enjoyable experience and the fact that you can now record the videos from the drone cameras makes it another added dynamic effect and makes it more fun overall.
– You can also download third party drone applications to play other augmented reality games which makes it pretty cool. They are also going to open up the SDK so future developers will be able to make their own applications for the AR Parrot Drone.
– Very durable; I have crashed this drone many times and it did not leave a single bent
– Easy to fly; the controls are actually really cool, and as I said below, very easy to fly by simply tilting your device in order to control your drone. Then they took into account whether you are going to use it indoors or outdoors and the foam hole casing again adds to the durability of the drone and this ensures that you’re going to have fun no matter where you decide to play with it.
– The product does live up to its price tag. I personally think the $299 price is totally justifiable as it can add dozens of fun times to the whole family. The design, performance, hardware and the software are all top notch and the price is perfect for what it offers.

If this review has convinced you to buy a drone, check out the Amazon page to buy the Parrot AR Drone 2.0!