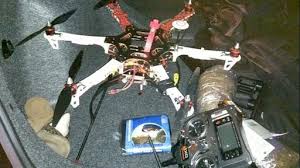 A hexacopter drone that was probably custom built for ‘deliveries’ has crashed in the fence of a South Carolina maximum security prison before actually making it inside. The drone was carrying contraband such as marijuana, cellphones and cigarettes. The authorities believe two outside people to be involved. One of them, thought to be the drone pilot has already been arrested and is accused of the illegal smuggling. The other man was caught on CCTV camera buying the products found attached to the drone.

This is not the first a drone has attempted to deliver stuff to inmates; a previous incident on April 21 found that a small quadcopter drone crashed into some bushes just outside the prison gates in Bishopville. This drone also contained marijuana and cigarettes.

No inmates have yet been accused of involvement.

Whilst the FAA may be taking its time to rule on the legal use commercial use of drones, we are probably going to see a lot more incidents such as these take place in the future.