Ever since we added the bebop drone to our list of drones for sale, our readers have been emailing us asking when the bebop drone review will be live. Although we haven’t received our Bebop drone yet, we still wanted to share our impressions and write a preliminary bebop drone review based on our impression of several friends and other Bebop drone buyers who have already purchased this drone. This should hopefully give you an idea of whether you want to buy this drone or not. If you are looking for Bebop drones for sale, then go to Amazon to check the most up to date price. 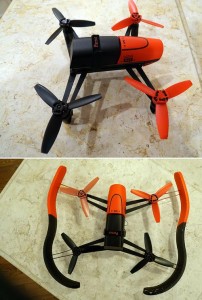 drones, at only about 390g. The front of the drone contains all the stabilisation systems which do in fact work extremely well – I have to give it to Parrot for really upgrading their in-flight stabilisation system. It was good on the AR Drone, but on the Parrot it’s actually much better.

There is also foam over the front casing which should protect the drone in case of any crashes. It protects the drone propellers, but at the same time it will prevent from damaging any objects (or persons) that you may accidentally come into contact with whilst learning to fly it. The GPS module sits on top and the WiFi transmitter and receiver at the back of the ‘body’ as you can see in the following annotated diagram of the Bebop drone features:

One thing the pictures don’t show though is that there are a lot of wires just floating around, so this means you have to be extra careful to prevent any water from getting to these connectors.

The Bebop drone camera also comes with a lens cover, which is pretty neat. 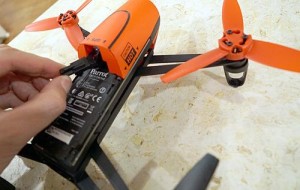 he battery slides at the bottom of the drone and if you want to secure it further, you can a bit of velcro to make sure it doesn’t fall out. Unfortunately, this is quite flimsy and people have reported problems with attaching the battery in the first place and also with the battery easy falling out. Now of course, this problem seems pretty ridiculous with a $500/ £500 product, but it is likely to be fixed in future versions. Also, depending on where you buy the drone from, you get two batteries in the pack, which I think is a brilliant idea.

Another brilliant idea is that Parrot supplies extra propellers in the pack and I wish more drone manufacturers would do this. If you do go through the spare ones as well you can always buy more separately, but provided you’re not the worst flyer out there, they should last you a good while.

I am not going to go into much detail about the bebop drone controller because we have covered this several times before. The drone uses the same app, the FreeFlight 3 that all the other Parrot drones use. It is available on iOS, Android and Windows 8.1. If you want to take a more in depth look at the app interface, we have covered this in more detail in the Parrot AR Drone 2.0 review last year.

An excellent feature of the FreeFlight 3 app is that it begins recording the video as soon as you get your drone up in the air. 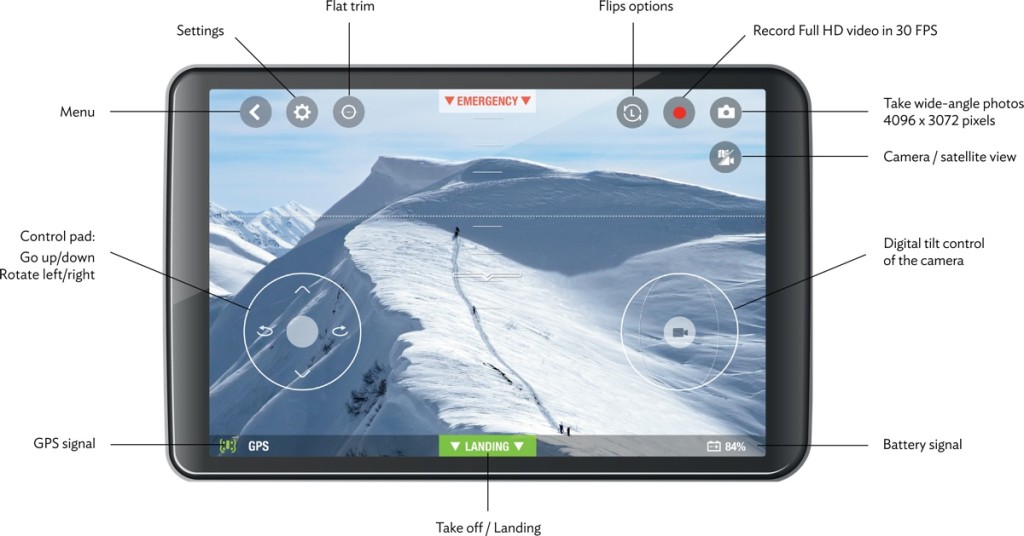 With all the excitement of your first flight, you may sometimes forget to hit Record, so this sorts that problem out. The other new feature is that you can tell your drone to take a picture every 5 seconds whilst in the air. All the pictures and videos are stored both on the drone’s 8GB flash storage and on your phone too. I will have to double check this, but I am pretty sure that you can set it so the data is only stored on one device; either the drone storage or your smart phone or tablet. If you only have a 16GB iPhone that’s constantly out of storage like me for example, then you might be annoyed by your drone videos taking up lots of valuable space. 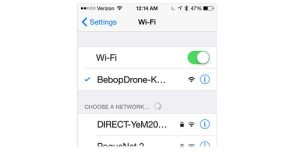 The other cool feature that the FreeFlight 3 app provides and the Bebop drone can do is to simply draw the route you want the drone to take on a map within the app. The drone will then, with the use of GPS follow that route exactly.

The drone will establish its own WiFi connection between the drone itself and your smartphone or tablet.

The most anterior point of the drone, except for the lens cover, is made up by the camera. If you watched some drone videos on YouTube already, you will have seen what this drone is capable of. Parrot sells this as a 14MP camera with a fish eye lens. This basically means that unlike the typical cameras available on previous Parrot products, the Bebop camera is basically a wide lens. It is able to capture much more image horizontally and produces that effect you get when you try to take a panoramic shot with your iPhone. People have been saying that the drone is actually very stable whilst shooting videos or taking pictures, with very little vibration. 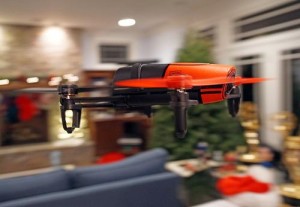 Although a lot of people have been praising the quality of the pictures and videos, don’t expect to get anything like what you would get from one of the latest GoPro camera models. It gets close, but no cigar!

Although the camera itself does not rotate like on other drone models like the DJI Phantom FC40 and other camera drones, you can still rotate, tilt or pan the whole drone which essentially is equivalent to moving the camera around.

We hope you found this Parrot Bebop drone review useful. This being the first version of the drone, it is not perfect, but at the same time it’s a big improvement from the AR Drone 2.0, in terms of design, size, camera capability and stability too. If you have any comments or want to suggest further tips or advice for any drone flyers, you can contact me and I will add them to the list.