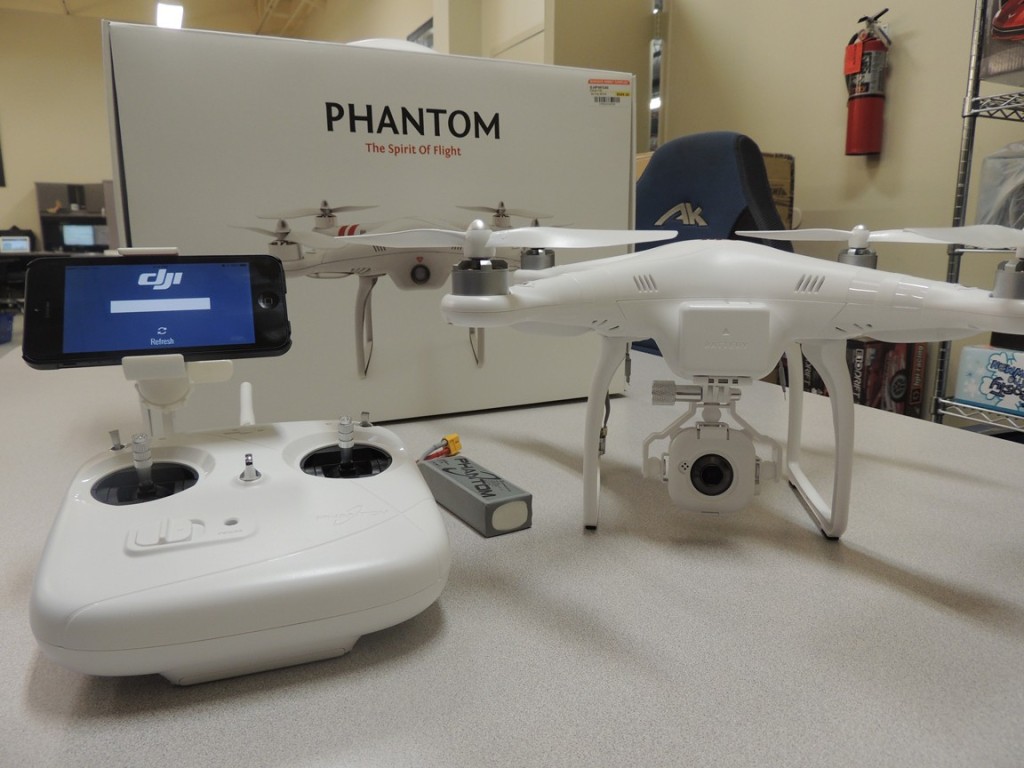 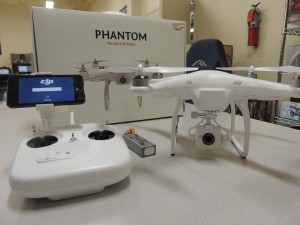 One of the most popular drones for sale this Christmas is predicted to be the DJI Phantom FC40. It is a strong model, reasonably priced (a lot cheaper compared to the DJI Phantom 2 models) and sturdier than the AR Parrot 2.0 drone. We have therefore decided to test and write a review for this FC40 drone below. One of its main advantages is that you can also attach a GoPro to it and control the GoPro via the GoPro Hero+ app via Wifi separately from the drone.

This is possible because the DJI Phantom FC40 operates on the 5.8GHz frequency so it will not interfere with the GoPro camera. We personally recommend the GoPro Hero 3 Black edition because it has a better battery life and is 33% lighter than the other models (and the weight is an important factor if you are going to attach it to a drone, otherwise the drone’s battery life will drain even quicker). Even better, if you are looking for a DJI Phantom for GoPro, then this is the one to get.

You can use the GoPro Hero 3 Wifi App with the Phantom FC40 because they operate on different frequencies. This is not possible with the DJI Phantom 2 Vision.

This is not an unboxing review, as I have been using the Phantom FC40 for a number of months, but I thought I would give you an idea of the various different flight modes from my point of view. I will also mention some of the cool features and camera specifications. If you are after unboxing videos, you can find plenty of those on Youtube. I bought this drone at the beginning of 2014 as it was well priced and affordable at the time. Of course, the prices have come down even further since then so it’s even more of a bargain, especially with the Christmas discounts just around the corner. It is technically the same price as the Blade 350QX RTF drone but this one comes with its own camera and it’s a DJI! It does not feature specifically in this website’s drone buying guide, but I will go through all of the details below.

I have been flying drones and quadcopters like these for a while now, and I also have a fair bit of experience with fixed wing aircraft. I have quite a good grasp of what I am doing but I am certainly nowhere near good enough as some of you guys out there who are experts. Needless to say, I wanted to mention that in no way do you have to be an expert to fly this drone. But at the same time, it is not a toy. You need to take the flying seriously otherwise you can injure yourself or other people. 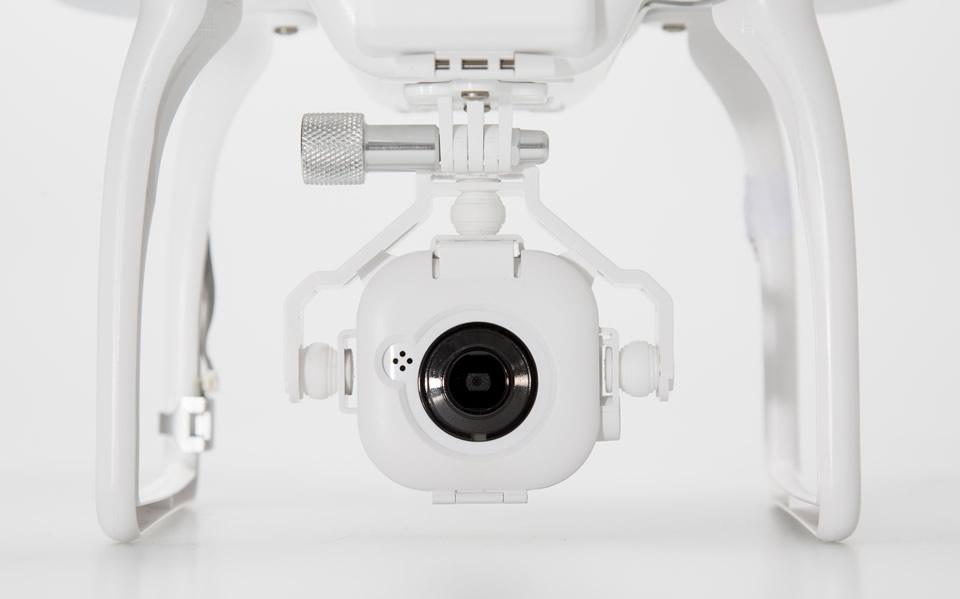 The DJI Phantom FC40 camera is more powerful than it looks

So here is the FC40 camera that comes attached to the drone gimbal and it comes in the same package with the main drone. First of all, it is a 720p camera that can offer 30fps of video recordings and it’s extremely small and light weight. It is not going to be as good as a Go Pro, but it is much lighter and smaller. The FC40 drone uses the same drone gimbal as what the Go Pro uses, so you can actually take this camera off and put a GoPro on instead if you have one and would prefer higher video quality (or if you just want to look more professional).

Now, I have put a GoPro on my Phantom FC40, but the extra weight that it adds will sacrifice a bit of the flight time and maneuverability. That’s the main reason I recommended the GoPro Hero Black edition earlier, because it is much lighter than other GoPro versions and with this drone, every little counts, especially if you haven’t got a GoPro already. The price difference between the models is not actually that much. 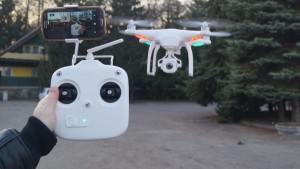 Anyway, the default camera works perfectly fine. One of the nice things is that the FC40 drone has its own app which works on the iPhone and Android so you can use this app to get a first person in flight view. You can also start and stop recording from your phone.

It is not quite as good as a real time FPV setup, that you would achieve with the GoPro, and of course it is via WiFi so there is a bit of a lag so the further away that you get with the FC40 drone, the laggier it gets.

It also doesnt make it perfect for FPV flying, so if you get more than 300-400 feet away then it does get quite laggy and becomes slightly more difficult to fly. However, you can see that far so it should not affect you that much. The video that records on the standard camera SD card, will be smooth 30fps without any lag whatsoever. 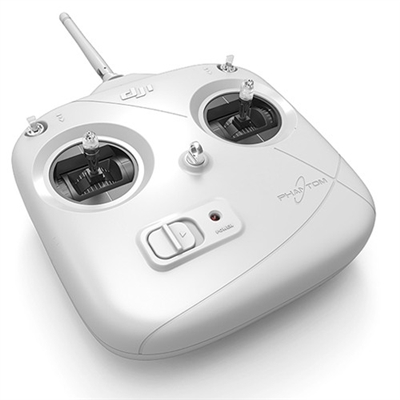 The DJI Phantom FC40 Controller allows you to easily switch flight modes, even while in flight

The transmitter is pretty simple actually, and similar to the other DJI Phantom models. From the picture above you can see the On/Off button with an LED light showing when it is turned on. It also makes a beeping mode when it comes on.

The two small switches at the top on either side (S1 and S2) allow you to switch flight modes. One of the flight modes is ATTI which basically maintains the FC40 drone in a level position so it stabilises itself at the same altitude. However, it does not maintain its longitudinal position by GPS, so it may still continue to drift. I find this mode very good for shooting videos. For example if you are focusing on a subject and just let it fly by itself on this mode, the video comes out very smooth. If you try to shoot the video and control the drone, the video may become quite choppy. It’s probably the mode I use most when flying.

Other flight modes that you can choose from that switch include the GPS flight mode. This will maintain the quadcopter in its fixed position based on GPS, after you release the switches. So it won’t be affected by the wind. It will in fact correct itself if the wind makes it drift away, it will revert back to its original position.

When the switch is all the way down, that is manual mode. Now this is a more advanced level of flying because the accelerometer inside the DJI Phantom FC40 does not attempt to maintain a level, so as soon as you let go of the sticks, the copter will keep going in the position it was flying to before. Now this can be quite dangerous and it’s an easy way to crash the copter, but you can do some cool stunts with it! However, if you lose control of the copter, you can quickly switch the flight mode back to ATTI mode and it will quickly start to stabilise itself. So far, I haven’t had a problem with that and it’s prevented many potential crashes!

The switch on the left allows you to either ‘course-lock’ or ‘home-lock’. These only work if the flight mode is set to GPS mode. In the home-lock position, regardless of which way the FC40 drone is facing, if you pull the right joystick down, it will come towards you and if you push it away from you, it will go away. So it doesn’t matter which way you are facing, the drone will return home, in other words to the controller.

Course-lock basically remembers the direction you’ve just flown in and that re-orientates the sticks.

The battery life here is about 10 minutes with the default battery, but you can buy higher capacity batteries off Amazon that can extend the flight time to up to 25 minutes. This is plenty of flight time to get some awesome drone video footage!

The DJI Phantom FC40 is a solid drone for you to buy, and get yourself or someone else a really cool Christmas present, or for any other occasion of course. With so many drones for sale, it’s difficult to make a choice, but at $449 for a DJI Phantom drone with a 720p Camera, auto-stability mode, GPS mode and easy to fly controllers, I really think it is a bargain and a great deal to get this Christmas.